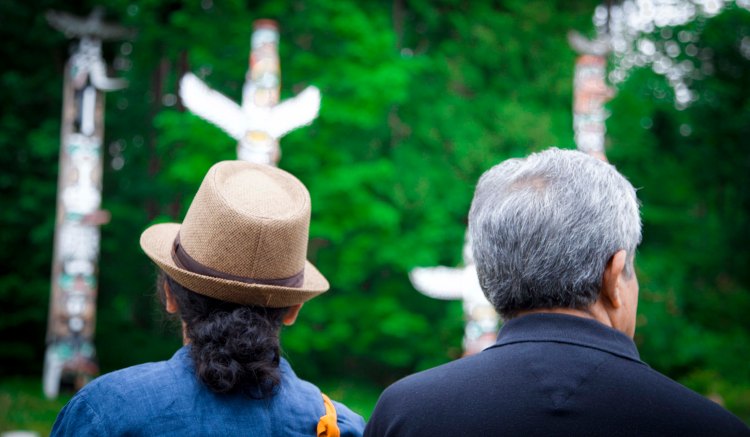 A few weeks ago, at 6 am in the morning, I received a startling message from a family friend. My dad had been in an accident in Vancouver, and he was in the ICU. Before I could process the news, my body had already begun to react. I started shaking uncontrollably. The only comfort was my constant recitation of the Medicine Buddha Mantra.

My sister came into my room and found me in a state of shock. When I finally communicated what I had found out, she immediately sprung into action, calling the hospital where he was at and finding out the details from the nurse. We were able to speak to him, and although he sounded tired and in pain, he was still coherent and strong. In that moment, I was reminded of how powerful a voice can be. Just hearing his voice made me feel better. I always talk about the power of one voice with my students, and how we have the ability to speak and be heard. But this was different. This was the affirmation of life. Of breath.

My sister and I both teach, and somehow managed to get through our day despite the image of our father lying in a hospital bed playing over and over again in our minds. We booked our flight and packed, in a daze. My sister was already sick and on antibiotics, and I had just left my job at the Markham Arts Council, where I worked for almost 3 years. We were drained before we even stepped on the plane.

After arriving in Vancouver, we went straight from the airport to the hospital. My dad looked better than we expected him to look- perhaps because most of his injuries were internal. He told us stories and addressed the nurses in a polite and courteous manner, despite the immense pain he was in. His strength gave us strength. 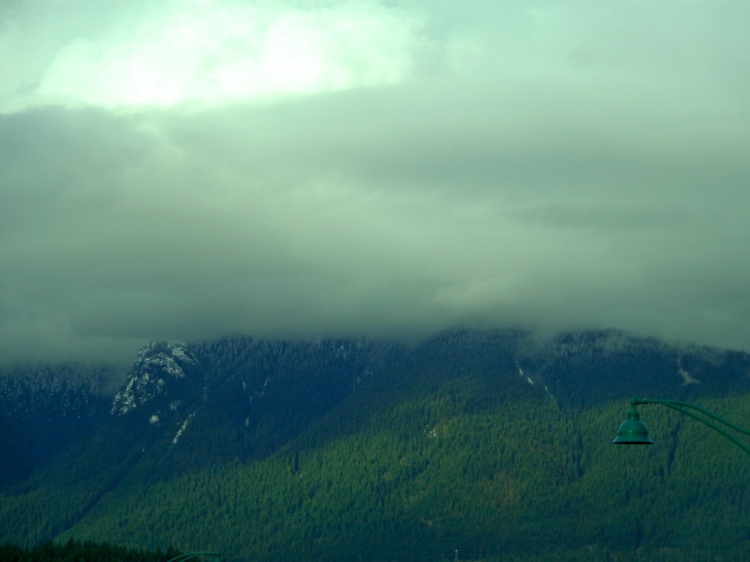 In between the long hours we spent with my dad, I took to taking walks down the hallways of the hospital, peering into rooms of other patients. It woke me up to the fact that so many people are sick and suffering every day, and how much they need us to know that they are there, that they need healing and support.

Sometimes I stood in front of the giant windows, staring out into the mountains- the snow and mist swirling at their peaks, the verdant green of the trees dotting their slopes. Being able to look outside and see the mountains- to know they were there-  witnesses, grounded between earth and sky. When I felt overwhelmed, I walked back and forth, like the waves of the sea. When I felt exhausted, I sat, like the mountains. Being back in Toronto, without the presence of the mountains, or the heaving waves of the sea, I feel as though something is missing. I have to imagine that the mountains and the sea are within me.

Between spending time with family, visiting my grandmother in her nursing home, spending hours on end at the hospital and running errands for my dad, my sister and I hardly had a moment to sit and reflect. We spoke about this, and I told her that I’d like to take a break in nature- even if it’s only 10 minutes. Just to sit and breathe into a scene, without having to think about who we have to call next, or who we have to see next. She agreed. After getting lost twice, we managed to make it to the sea, where we spent about 15 minutes sitting on driftwood logs and looking out into the ocean as the sun dipped lower and lower in the sky. I knew I had to do something with my hands. Speaking or writing were too abstract. I needed a concrete way to let go.  And so, I started to create land art from small objects like driftwood pieces and shells to large logs and stones that were left behind by the water. 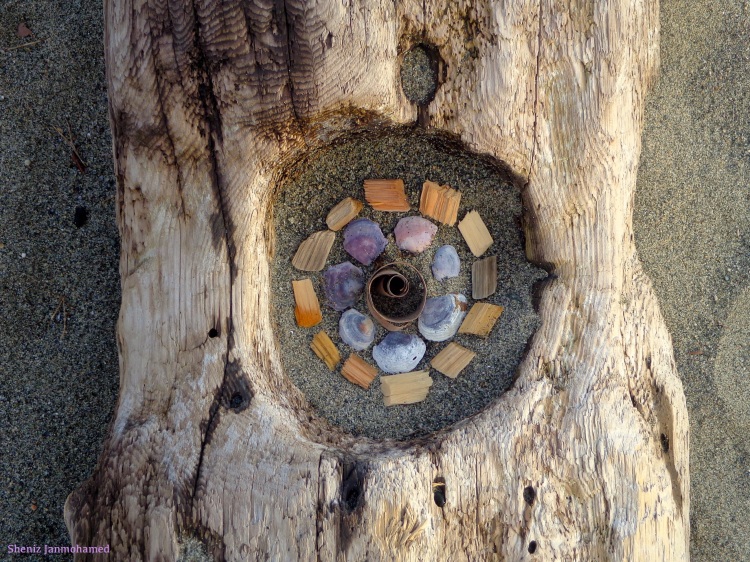 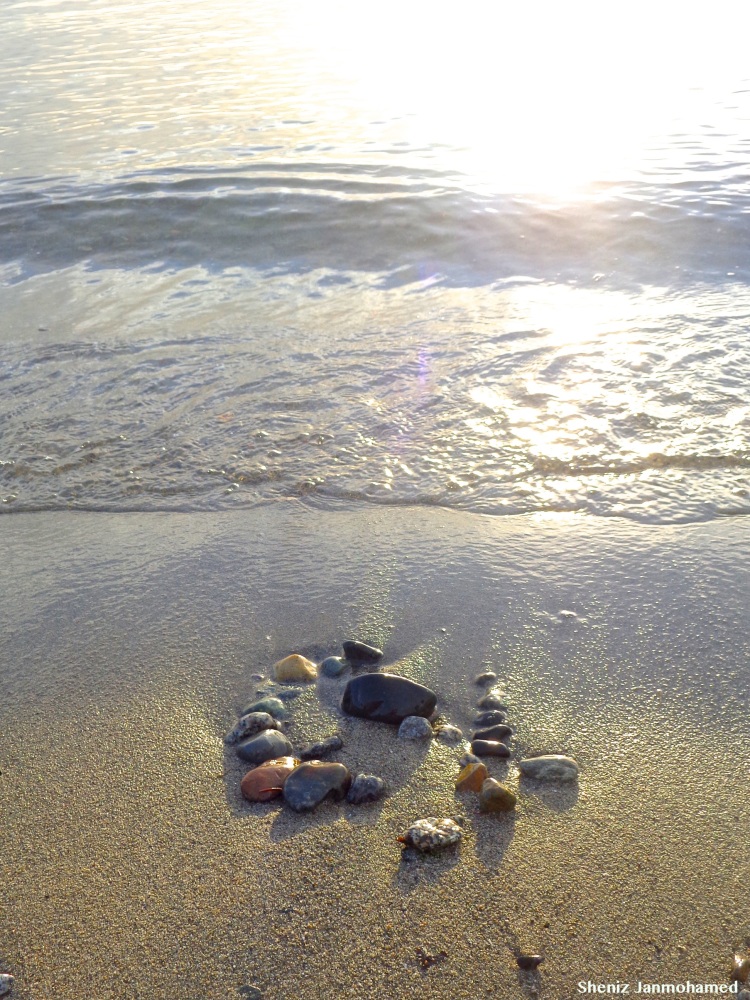 I tried to create a stone mandala but the moment I created a circle or stacked a stone, the tide would come in and shift the circle or take a stone with it. Every time this happened, I would try again. The water was frigid and my hands and boots were wet, but I kept going. I wasn’t trying to control the outcome, I was just playing with the possibilities. If I had tried to predict what the piece would look like, I would be disappointed with the result. If I had raged against the ocean, I would’ve ended up angry and unsatisfied. I just had to let the water do its work, and continue to be flexible. 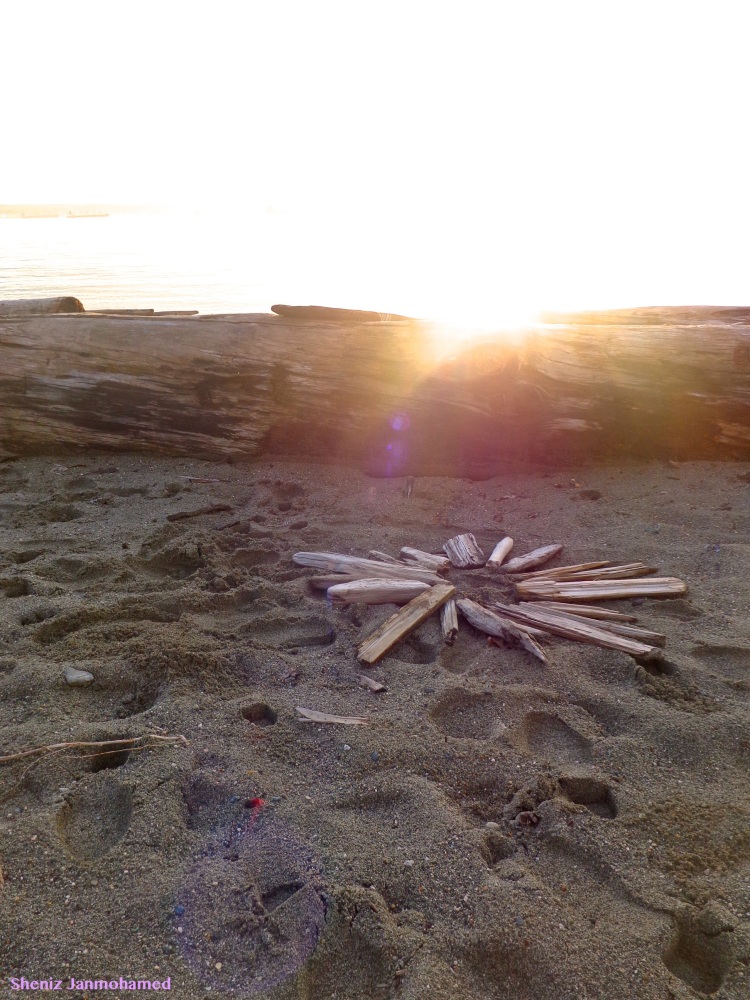 My sister indicated that we had to go and visit my grandmother before it got too late, and she started to walk away from the water and towards the parking lot. I followed, at a much slower pace. My eyes were peeled for objects on the beach, looking for something else to touch and move. I came across a stack of perfectly worn driftwood, as if it were waiting for me to do something with it. I couldn’t ignore it, even though my sister was already in the parking lot and getting into the car. I quickly created an imperfect circle of driftwood logs, and waited just a moment for the sun to spill light onto the scene before taking a photo.

My sister and I had to leave Vancouver a week later, and as we sat in the airport cafe, we looked out onto the tarmac and saw the mountains in the distance. The ever present, silent domes of rock.  I knew that despite the fact that I cannot control the circumstances or change the outcome, I can tap into those mountains. I can be be still in the face of swirling chaos and stay grounded in the midst of uncertainty.

3 thoughts on “The Mountains”